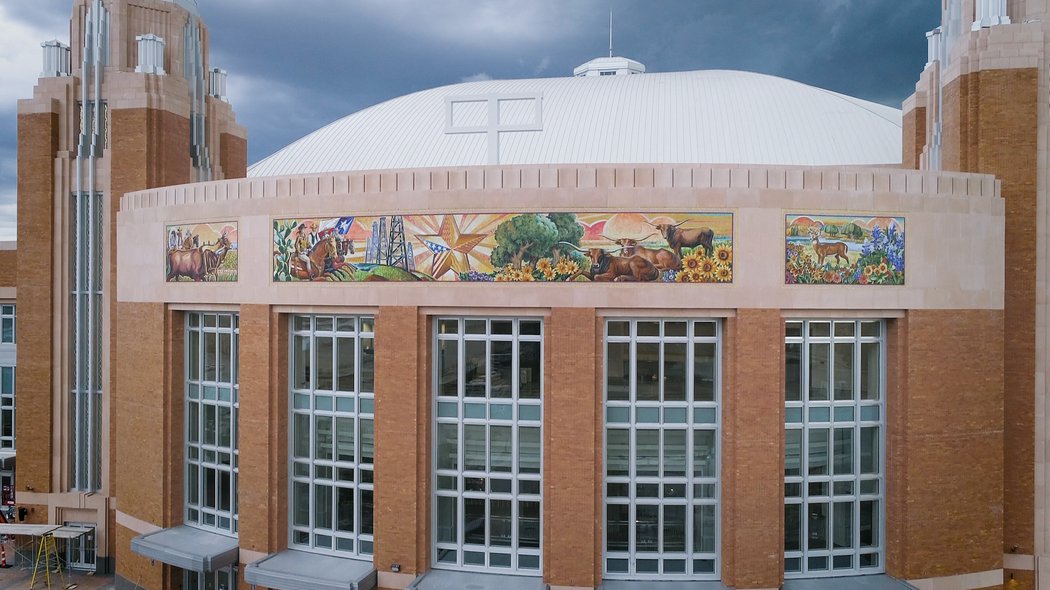 The beauty of the new Dickies Arena begins at the front door.

A giant mosaic of wild horses — made of 600,000 glass tiles and crafted in Mexico by 28 women whose ancestors worked under Diego Rivera — spans the new city arena’s south facade and links the $540 million events center to America’s frontier past.

Colorado artist William Matthews’ “Los Caballos” is not like the mosaics on the other Will Rogers Memorial Center buildings.

(For that, take a look at the north entryway and its Italian-made mural of Texas flags, oil derricks, longhorns and bluebonnets.)

The south mosaic is a classic Western watercolor cast in glass tile, with wild horses roaming the Great Plains between bronzes of a Western cowboy and a Comanche.

“The horse is the universal symbol of the West — it brought all races and cultures together,” said Matthews, 70, of Denver, a Berkeley-hippie-turned-artist who painted “Los Caballos” for hand-cut glass tilework by Mosaicos Venecianos in Cuernavaca.

“The Great Plains was transformed when the Spanish brought the horse,” said Edward P. Bass, chairman of the arena and donor of more than half the cost.

Bass’s gift of at least $315 million toward the arena is the third largest charity gift in Texas history according to The Chronicle of Philanthropy.

He called the mural and tilework “really magnificent.”

“It’s really remarkable how they were able to interpret a watercolor painting,” he said.

In Mexico, assembling the mosaic took 28 artists, all women, working from December through August on a table 65 feet long, Matthews said.

“These are the people who learned from the old masters,” Matthews said.

He called doing the mural a “dream come true” and Fort Worth “one of the great cities in America — an unapologetically Western city,” he said.

In a city with two museums founded on Western art — the other is the Amon Carter — “Los Caballos” is a “welcome addition,” she wrote: “You can hear and feel the movement of the horses as they gallop freely through the sagebrush.”

Flanking the mural are the bas-relief sculptures of the cowboy and Comanche.

The Comanches “were the ‘Lord of the Plains’ — they were the master horsemen,” Bass said during a media tour.

The sculptures are by Parker County artist “Buckeye” Blake, 73.

“This is a Western center,” Blake said.

“What better way to show that than to have two different cultures, both on horseback, depicting the history and not judging it?”

The more traditional triptych across the north entryway has its own message. It was fabricated in Italy and created by New York-based EverGreene Architectural Arts for the arena, designed by Washington-based arena architect David Schwarz.

The north mural depicts a cowgirl with three cowboys: white, African American and the Hispanic vaquero, the first cowboy.

This should not be a surprise, but the Old West was not as white as Jim Crow-era Hollywood movies.

“Then you have the vaquero — the tradition of horsemanship came through Spain and Mexico. The vaquero brought those traditions.”

The arena is also trimmed in artistic touches like carpet and balcony posts depicting Texas prairie grasses like bluestem and sideoats grama.

On the Art Deco exterior, trimwork depicts events in the arena: a guitar and treble clef for music, a basketball goal, horses and a circus tent.

Around every turn is another reason to love Dickies Arena.