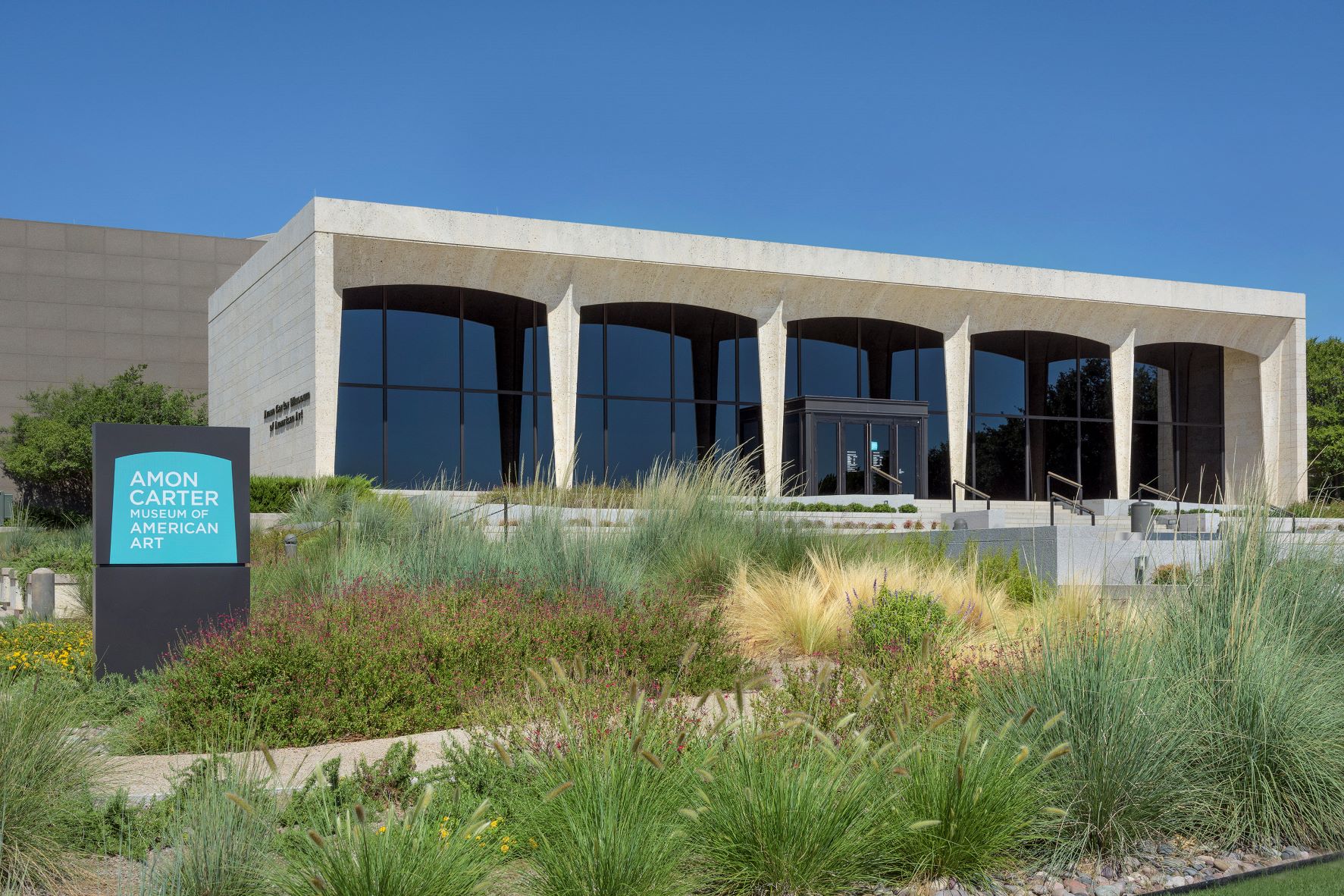 After closing for the summer, the renovated Amon Carter Museum reopens with new exhibits

After closing for the summer to complete a year-long interior renovation project, Amon Carter Museum of American Art reopens on Saturday, September 14 with updated galleries and new exhibits.

The changes are apparent when you walk in the front doors. There is art in the lobby again thanks to the edition of an automated shading system that protects the works from the sun.

A highlight from the museum’s collection, Marsden Hartley’s 1914 seminal American modernist painting, “American Indian Symbols,” is one of the first works you will notice on the left.

On loan for the next two years, James Surls’ complex pine and steel suspended sculpture, “Seven and Seven Flower,” takes up most of the other side of the lobby.

With a modern classical facade from designer Philip Johnson, the museum first opened in 1961 as a repository for the collection of Western art from newspaper publisher and philanthropist Amon G. Carter, Sr. Executive director Andrew Walker says the renovations have “preserved and enhanced” Johnson’s vision.

Most of these renovations are on the second floor, where the public spaces are larger and have been significantly redesigned.

Cubby spaces have been opened up and large walkways create a continuous flow through the galleries. Carpet has been replaced with hardwood floors, HVAC systems have been updated to preserve the art, and the lighting has been significantly improved, with thousands of LED lights replicating a skylight in one gallery.

The new layout includes movable walls that allow the special exhibition spaces to be reconfigured, making it easy for the museum to host more than one show at a time. 19th century selections from the permanent collection were reinstalled for a presentation that is now thematic instead of chronological.

On view through December 29, “Gordon Parks: The New Tide, Early Work 1940—1950” is the largest new exhibit with 150 images that capture the quick rise of one of the greatest social documentary photographers of the 20th century.

Parks was a self-taught photographer who did not even know what film was when he purchased his first camera in 1937, according to senior curator of photography John Rohrbach.

But by the early ’40s, Parks was a high society photographer documenting Chicago’s Black Renaissance community of artists and writers. In 1944, he moved to New York and started shooting for picture magazines, eventually becoming a staff photographer at Life, which had millions of subscribers.

His street photography, images of blacks and whites living in similar squalor, along with photos of church services, daily routines, and working conditions are as important as anything in this exhibit.

From 1948, the devastated facial expressions of a mother and child viewing Babe Ruth’s corpse inside Yankees Stadium is one of the most haunting images from this show. In 1950, Parks returned to his Kansas hometown, Fort Scott. Documenting small town segregation and poverty, this series includes people Parks grew up with and it is some of his most poignant work

On view through December 1, “Seeing in Detail: Scott and Stuart Gentling’s Birds of Texas” is a selection of ’80s watercolors with remarkable attention to detail from the Fort Worth painters. Each work captures a native Texas bird, such as a Cliff Swallow or a Mourning Dove, in Texas landscape features like Big Bend or roadside bluebonnets. The exhibit is the first of two focused on the Gentling brothers’ works in conjunction with the museum’s new Gentling Study Center.

“Scott and Stuart didn’t just paint birds, they lived with them,” said assistant curator Spencer Wigmore. “They rehabilitated wounded birds of prey and Stuart was an accomplished taxidermist. They left traces of their complex relationships with birds throughout this series.”

Another exhibit features an installation from new media artist Camille Utterback that translates viewers’ movements into an animated digital painting. Paired with other works that depict motion from women including Georgia O’Keeffe and Helen Frankenthaler, “Set in Motion: Camille Utterback and Art That Moves” is on view through December 8.

And finally, the Carter commissioned “Puente Nuevo” by Justin Favela, an artist from Las Vegas known for exploring the commodification of Mexican culture with sculptures created using piñata techniques. Favela is using those same techniques to create a large-scale immersive artwork that will be completed the day before the museum reopens.

Amon Carter Museum of American Art reopens at 10 a.m. with their annual Party on the Porch event on Saturday, September 14. For more info, visit cartermuseum.org.